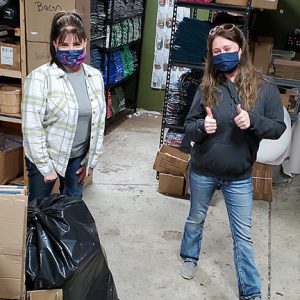 This is a serious question requiring a (mostly) serious answer. Uranus has been taking the virus threat very seriously and took steps to protect its staff and customers during the quarantine. On March 16, Uranus sent its staff home and shut its doors to the public in response to a quarantine order here in Pulaski County.

During the quarantine, two staff members stayed on property full time, protecting Uranus and preparing for when Uranus is open and flowing freely again. Katya "Kat" Kadavera and Jerry Watkins stayed on site, at opposite ends of Uranus, working on construction projects, cleaning, and preparing Uranus for the return of staff. During the quarantine, the Uranus Sideshow Museum was moved into a new remodeled space, the exhibits freshened up and added to, as well as given some very cool new features.

Kadavera, a major Sci-Fi fan, compared the experience to some of her favorite post-apocalyptic movies, “It's like Mad Max, the first one.  Imagine being at the Main Force Police depot.   There was a lot of watching and maintenance while protecting and serving Uranus as the world outside hit the fan.”

Also during the quarantine, Tiffany Baker, took care of shipping orders out of Uranus, packing fudge in Uranus for all the happy customers out there and maintaining her social distance from Jerry and Kat. This made for awkward yelling conversations across the Uranus parking lot, but they managed it. Jerry had to turn his hearing aid up and Tiffany had to start wearing ponytails so her ears weren’t covered, but adaptation during a pandemic is important.

“The eeriness of being alone in Uranus was short lived, as The Mayor repeatedly popped his head in and out. Some may call it shouting, but to me it just seemed like a normal day of listening to his "great ideas.” As I worked diligently, to pack everyone's fudge, he would pace back and forth spouting ideas to get Uranus safely reopened to the public,” Tiffany Baker said of her time in Uranus, during the quarantine.

“During the quarantine I was appointed Police Commissioner and cook for the 24/7 security detail assigned to Uranus. Mornings on weekdays started with breakfast at 7:30am, and weekends 8:30am. Mayor Louie left us plenty of provisions to get creative with and dinners were fun utilizing the Redneck Nutz kitchen to whip up some of my favorite dishes. Kat commented that she hadn't seen so many ways to combine ground beef and cheese in her life. Nights were pretty much quiet with security walk through every few hours except for an occasional sign falling off the wall and bumps and sounds I attributed to our resident ghost, Fred. He certainly didn't mind having company in a quiet Uranus but made his presence known several times. Tiffany, the construction crew made days go by fast and the many calls asking if Uranus was open. We heard from many day after day on the road and look forward to reopening to the public,” Jerry Watkins told the Uranus Examiner.

During the quarantine, Mayor Louie stopped in to yell at them from doorways, bug Tiffany from at least a 15 foot distance, and hold Facebook Live conversations with the citizens of Uranus from home to keep the spirit of Uranus alive for fudge packers everywhere. His valiant efforts to keep spirits up in Uranus have earned him a nomination for citizen of the year from the Fudge Packers Union.

The Mayor appeared quite adamant, when he stated during a recent press conference, “People want their fudge packed now and I want to be packing their fudge now. This is how we get through this crisis. I have worked hard to make sure Uranus is clean as a whistle, so that when people start coming in Uranus again, it will be ready.”

On April 20, 2020, the staff of Uranus returned to a modified work schedule. The fudge packers are deep cleaning Uranus, wearing gloves, and masks, so that Uranus will be clean and fresh for visitors when it opens in May. The staff is getting deep into the cracks and crevices of Uranus, so it’s extra sparkling clean. They’re all doing this from a social distance from one another and, those that can, are doing some jobs from home, like this editor. Uranus is requiring that all staff wear masks and gloves, in order to protect themselves and the customers they serve. Staff is observing social distance guidelines as they work.

In fact, a staff meeting was held the morning they returned to work in which Mayor Louie yelled across the parking lot to staff gathered there, standing at least six feet apart and wearing masks. The staff all agreed afterwards that Mayor Louie needs a megaphone.

During this meeting, anonymous sources in the Mayor’s office, such as Miss Tiffany, told us that the Mayor said it would take “more than a pandemic” to stop him “from Packing the Fudge of our Citizens.”

What do you need to know about visiting Uranus or ordering from our online store? Every precaution is being taken. Uranus is taking the virus seriously, but we’re still making jokes and entertaining our customers and that’s why you love us. When we do open in May, we ask that our visitors observe the CDC guidelines as well with social distancing, hand washing, and being cautious too. After all, we want Uranus to stay healthy.